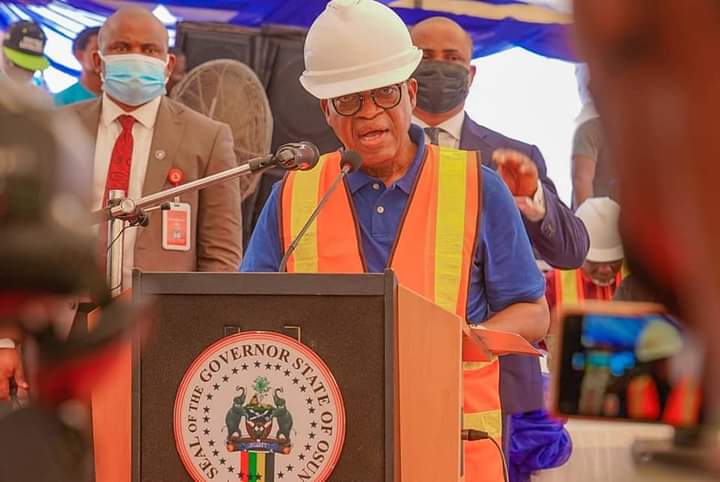 The Governor of the State of Osun, Adegboyega Oyetola, on Thursday flagged off the construction of state-of-the-art multi-million Omoluabi Shopping Plaza in Osogbo.

This is even as the Governor reiterated the Administration’s commitment to ensuring quick recovery of the state’s economy by continuously investing in things capable of stimulating and reviving the State’s economy for progress, transformation and prosperity.

He said that the State under his watch would continue to witness monumental strides, particularly in the areas of infrastructure, commerce and industry, saying Osun economic revitalisation remains non-negotiable.

The proposed four blocks of 176 lockup shops when completed would serve the teeming traders and business people in the State, particularly in Osogbo, the State capital, and contribute greatly to the socioeconomic and commercial upliftment of the State.

The construction of the shopping complex would be executed and funded by the Omoluabi Holdings Limited, popularly known as Osun Investment Company Limited (OSICOL).

Addressing the people during the flag-off ceremony at Orisunbare area, Osogbo, Oyetola said the gesture was one of the significant steps that aligned with the Administration’s commitment to uplifting the business and economic prospects of the State.

He said the project would go a long way to complement the Administration’s economic recovery plans as it would come with the ripple effect of greater income generation for the beneficiaries of the project and, by implication, the citizens at large when completed.

Governor Oyetola stressed that the construction of the shopping plaza was in line with his Administration’s Development Agenda aimed at expanding the vast commercial opportunities that the State offers on account of a fully-revitalised economy.

He attributed government’s huge investment in infrastructure development to its desire to actualise the ‘ease of doing business’ in the State, adding, “this has informed our strategic infrastructural development projects, especially roads and lately, the ongoing Olaiya overhead bridge, which is strategic for boosting commercial activities in Osogbo.”

He said the Administration’s policies and programmes were designed towards securing a better future for the State, hence government’s irrevocable commitment to socioeconomic, commercial and infrastructural developments springing up across the nooks and crannies of the State.

The Governor, who emphasised the administration’s commitment to turning Osun to the choice destination in trade and commerce, said, “Apart from this project of four blocks of 176 lockup shops, which when completed will serve our teeming traders and business people and contribute greatly to the upliftment of the State capital, we will also be building more markets across the State to further empower our market women and men to enable them to contribute effectively to the socioeconomic and commercial activities, thereby, boosting the State’s GDP.”

Oyetola added, “The building of a new market complex has become imperative because the old complex and available facilities have been stretched thin, whereas the pressure to accommodate new traders keeps mounting without corresponding increase in the size and facilities of the current market structure.

“The old market structure clashes daily with the modern order, and more importantly, the security architecture of the market has been called to question.

“Inadequacies in conveniences and flow of transactions as well as instances of fire outbreaks, among others, make it even more imperative to have a new and befitting market.

“In line with the principle of urban renewal, our Administration has proactively taken up the statutory responsibility of government to envision and plan to accommodate both the immediate and future needs of the people.

“We have also thought and planned ahead of the populace, as usual, with a view to bringing improved standard of living to the citizenry.

“Other markets construction that we shall be embarking on soon include Ogbe Market in Ile-Ife, Ifewara market, Orile-Owu market, Olufi-Gbongan market, Araromi-Ede market and Ikirun market. We are deliberately targeting some towns that share the same border with Osun for market construction to attract commerce and trade from neighbouring States. Our desire is to make Osun the choice destination in trade and commerce,” Oyetola said.

Earlier in his remarks, the Managing Director/ Chief Executive Officer of Omoluabi Holdings Limited, Dr. Tunde Faleye, commended the Administration of Governor Oyetola for turning around the socioeconomic, commercial and infrastructural fortunes of the State.

Faleye, who attributed the tremendous achievements recorded by the agency to the unflinching support received from the government, said Governor Oyetola has demonstrated that he understands and appreciates the peculiar needs of an average Osun person.

In his remarks, the Speaker, Osun House of Assembly, Hon. Timothy Owoeye, applauded the Governor for executing human-capital development projects capable of taking Osun to the path of progress and prosperity.

Owoeye who was represented by Hon. Lateef Jayeola, advocated continued support and cooperation for the government in its concerted effort to take the State to the next level.

Speaking, the Commissioner for Finance, Mr. Bola Oyebamiji, extolled the initiative, describing it as a timely and welcome development aimed at rejuvenating the socioeconomic and commercial activities in the State.

In their separate remarks, the Ataoja of Osogbo, Oba Jimoh Olanipekun, and Timi of Ede, Oba Munirudeen Adesola Lawal, lauded the Administration of Governor Oyetola for being committed to raising the bar of governance in the State through the execution of people-oriented policies and programmes.