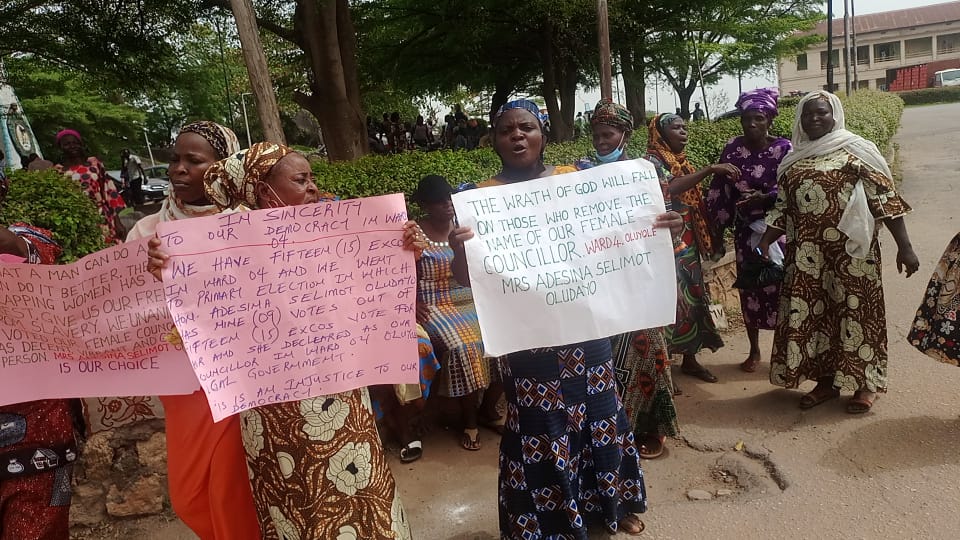 Members of the Oyo State People’s Democratic Party (PDP), Oluyole Local Government, have angrily stormed the state secretariat, Agodi Ibadan, today, to protest on what they called injustice and undemocratic cheating of the Oyo State Deputy Chief of Staff, Hon. Mojeed Mogbonjubola (a.k.a JAGABAN) for alleged removal of some councillor Candidates including Mrs. Adesina Selimot Oludayo.

According to AkedeOyo report, Mrs. Adesina, Councillor aspirant from Ward 4, Oluyole local government area said her name had earlier ratified on the primaries day but was later changed.

The aggrieved members expressed their displeasure over the attitude of the State Deputy Chief of Staff, since his assumption to office said he now has no regard for the party leaders.

Speaking to the protesters, Hon. Kunle Yusuf, the Senior Special Assistant on SDGs to the Governor admonished them that necessary actions will be taken to resolved the issue adding that they should shun violence, intra- party conflict.

He now assured the aggrieved members that all their grievances will be reported to the necessary authority.

The protesters appeal to the State Governor, the State Party Chairman amd others to help them restore Mrs. Adesina Selimot Oludayo, name she is the only female aspirant from the local government area.