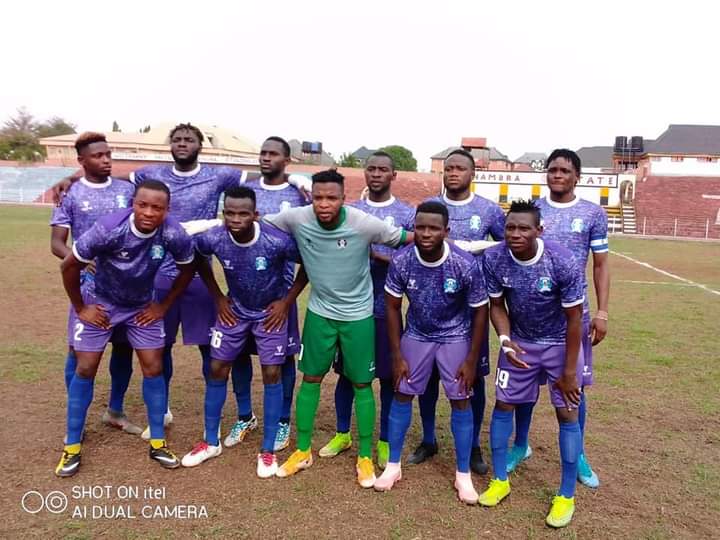 The Ibadan soccer lords put in all they had into the game played at the Rojenny Stadium, Oba but had their efforts thwarted by an unsuitable pitch as well as some moments of questionable officiating.

Fatai Gbadamosi, Akilu Muhammed were in the middle of the pack, while Enuademu Chinedu and Opeoluwa Olufeni operated from the wings, leaving Gafar Olafimihan as the main man upfront.

The Oluyole Warriors did all they had to do against the struborn Nnewi United boys but could not just get the result they wanted.

Opeoluwa Olufemi was unlucky not to have found the back of the net midway into the first half as his efforts missed the target after pouncing on a pull out by Ferinyaro Lanre.

The homers also missed a golden opportunity to score before the half time break, as their striker headed over the ball, with goalkeeper Okanlawon at his mercy.

Nnewi United came hard on the Stars in the second half, benefitting heavilly from the bad playing surface but the Ibadan soccer lords fought hard, giving it to the homers grit for grit

The inttoduction of the quartet of Muritala Taye, Abayomi Adebayo, Osaghae Junior and Hycent Nwakegwu, in the second half, strengthened the team.

When it looked like the game would end in a stalemate, luck smiled on Nnewi United in the 87th minute when Mmabuabuchi’s shot from the left flank, beat goalkeeper Okanlawon for the only goal of the match.

Efforts by the Ibadan soccer lords to level up within the three minutes left and the three added minutes could not yield dividend till the referee blew the final whistle, thus sending the homers and their couple of supporters into wild jubilation.

The last time 3SC lost a competitive match was on July 22, 2019, in the 0-3 loss to Akwa Starlets, now Dakkada FC of Uyo during a play off game decided at the Stephen Keshi Stadium, Asaba.

Inspite of the slim defeat, the Oluyole Warriors maintained their first position on the log and would definitely hope to bounce back to winning ways next Sunday when they play host to Vandrezzer FC of Lagos in a match day ten game in Ijebu -Ode.