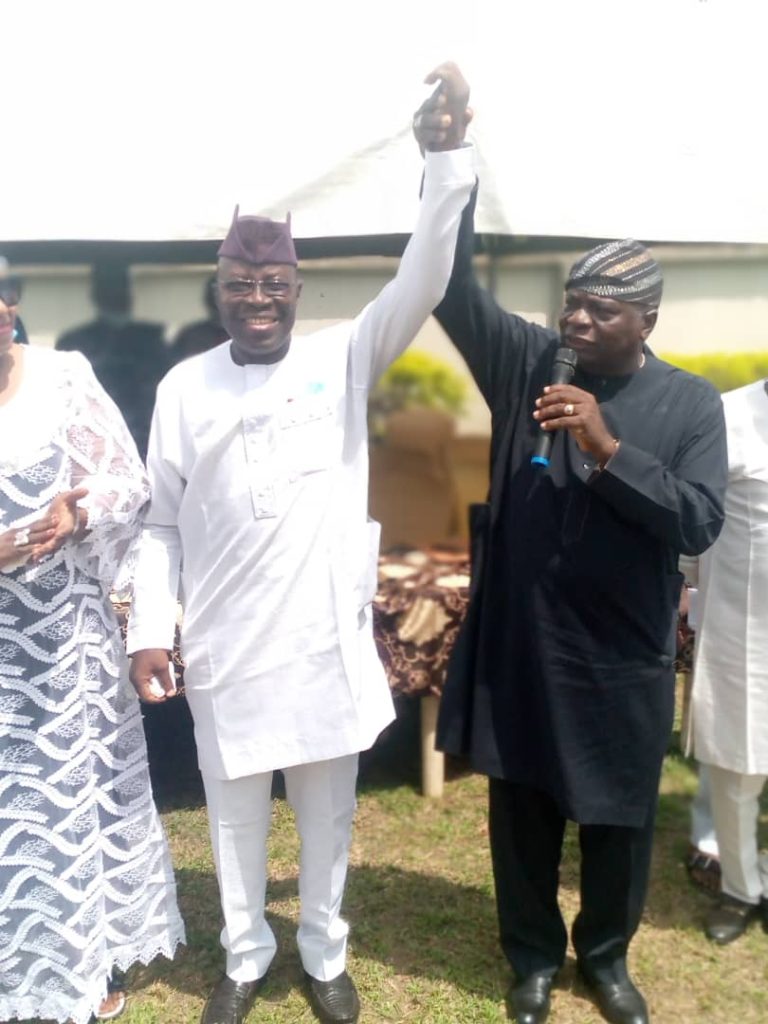 Ambassador Arapaja in pursuance of his ambition as the South West PDP Chairman, the ambition he tagged Unification Agenda. He visited the leadership and stakeholders of PDP in Osun State to seek for their supports.

Prince Oyinlola welcomed Arapaja and his Entourage to Osun State, while appreciating all state stakeholders, who deemed it fit to attend the gathering.

In his speech, he prayed the reason for this August meeting to come to success, which is the Zonal Chairmanship ambition of Ambassador Taofeek Arapaja.

According to the former Governor who likened the current situation of PDP in Osun State to the story of the biblical Israelites and pray Ambassador Taofeek Arapaja should be the next Esther of the Israelites to save the party from th current hurdles.

He recalled how masses have benefited from people oriented projects he executived as a sitting Governor from 2003-2010 and that PDP Should be back and stronger so as to liberate people from shackle and manacle of oppression as inflicted by APC. My brother, Arapaja is a man of great repute that could always be trusted to produce world class result, he added.

Arapaja thanked all leaders and stakeholders of the State for the warm reception and specially appreciated the former Governor of the state; Prince Olagunsoye Oyinlola for the leadership role he is playing and even the evergreen roles he played during the time of our late leader, Oloye Ariyibi Adedibu.

He also mentioned that he had learnt alot from the Former president of the nation, Baba Olusegun Obasanjo who s Prince Oyinlola’s mentor and father of all.

He talked about how PDP has been lacking behind in the zone, owning to how the party use to take a lead of having five States out of 6 states in the zone to having just one, which is not too good for the people. Apparently, no good development in the zone since our sister party take charge.

He later emphasized how alot has happened in the country, right from misplaced priority of the current Government at the federal level with special focus on security, ill-economy, high rate of unemployment. He said, people are looking up to our party as the only credible alternative.

As it is important that the party needs to put things in place so the party can win forthcoming general election. If not for the sake of the party members but for the people of the zone and Nigeria at large.

He also condemned the shooting and killings that happened in the last Bye Election in the state which claimed the life of a Police Officer and leaving many injured, he said in a democratic settings, election should never be a do or die affairs the way the ruling party had made it.

Lastly, he sent his condolences to the family of late Sen. Olowoporoku in Ekiti State, and prayed that the good Lord be with the family of the deceased and his household.

He appreciated everyone especially the women of the party who have been supportive since the journey begin.

In his own speech, Major RAT said Osun State PDP is solidly behind Arapaja, owning to the fact that he is the only viable option and individual who had the core interest of all, and the greatness of the party.

Alhaji Fatai Akinbaade also made his remarks by saying major stakeholders of the party in the zone are all in support of Ambassador Taofeek Arapaja and it would amount to waste if time and resources if Osun State is left out of the deal.

As Arapaja being the only person that could unify the party is all that is needed and not people who love to see the party in disarray.

2023: Your False Alarm On APC Billboards Laughable, No One Takes You Serious Anymore–Oyo PDP Replies Folarin