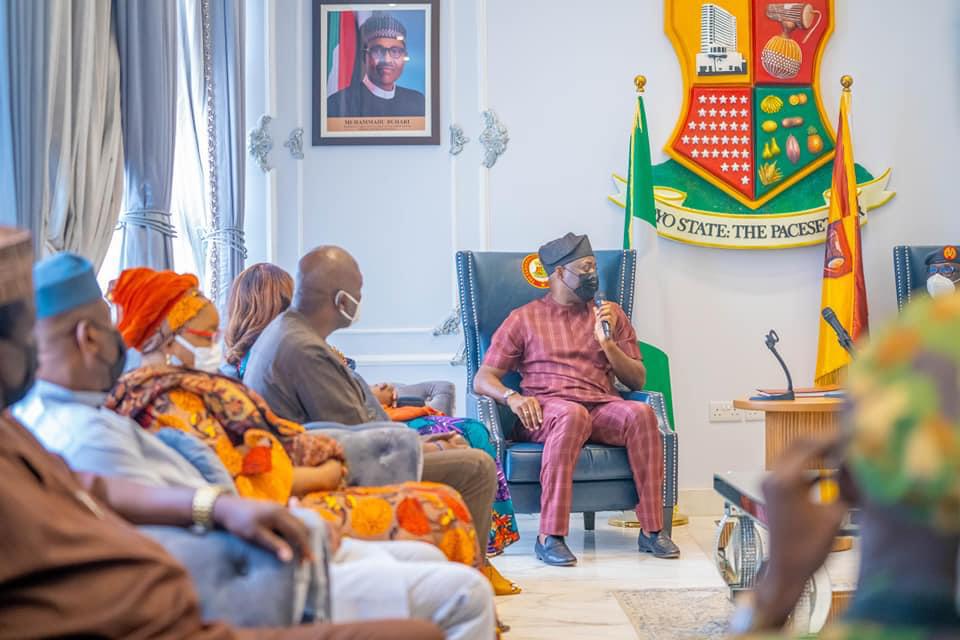 Oyo State Governor, ‘Seyi Makinde, on Thursday, said that plans by his administration to make Ibadan Airport a regional transportation hub are on course.

The governor added that his administration will improve social services and expand infrastructure at the airport to enhance the economic growth of the state.

A statement by the Chief Press Secretary to the governor, Mr. Taiwo Adisa, stated that the governor made this known while receiving the Air Officer Commanding, AOC, Logistics Command, Ikeja, Air Vice Marshal Olaonipekun Makinde, at the Courtesy Room of the Governor’s Office, Secretariat, Ibadan.

The governor congratulated Air Vice Marshal Makinde on his appointment as the AOC, Logistics Command, Lagos.

He said: “We want to use this opportunity to send our greetings to the Chief of Air Staff, Air Marshal Isiaka Dayo Amao. We congratulate him on his elevation and wish him well.

“Let me also commiserate with the entire Air Force on the loss of your officers and men in the air accident in Abuja. One of them actually happened to be from Oyo State and we are trying to reach out to the family to give the support required.”

Governor Makinde, who appreciated the Nigerian Air Force, especially the NAF Detachment, Ibadan, for its contribution to the security architecture in the state, said: “They have been very active, even in this trying time of security challenges. They have always been there not only in Oyo State but for the entire country. So, we are grateful for that support.”

Speaking further on the plan of the Oyo State Government for the Ibadan Airport, Governor Makinde said his administration is trying to expand the runway so that bigger aircraft could land at the airport, which, according to him, should be a true alternative to Lagos.

“We believe that the Airport in Ibadan should serve as a true alternative airport to Lagos if it has the capacity to take the 747 aircraft. So, we have a project that we are incubating right now. We are trying to expand the runway so that bigger aircraft can land in Ibadan.

“We are also looking at Ibadan as actually becoming the hub for regional air transportation. We are trying, even within the shortest possible time, to see if we can have a connection between Ibadan and Port Harcourt.

“We are talking to Air Peace and they should be starting an operational flight from Ibadan to Abuja in the next two weeks. And Ibadan to Port Harcourt should commence once we have finalised the discussion that we are having with them.

“It means that with all these activities we are bringing to the state and the Ibadan Airport, we will need more cooperation and collaboration with the Nigerian Air Force.

“I discussed with the Chief of Air Staff when he visited me here. We talked about the Air Force Base here in Ibadan and our House of Representatives member, Hon. Abass Agboworin, who is the Vice-Chairman of the House Committee on Air Force, is making efforts to bring some of these projects into fruition.

“One thing that we will surely want to have is more presence of the Nigerian Air Force here in Ibadan. And as a government, we are ready and willing to make that happen.

“About three days ago, I spoke with the Governor of Ogun State and we both agreed that we can fix the 11-km road that will take one from Akanran(in Oyo State) to Ijebu-igbo, Ogun State. So, what that means is that from the airport, anyone coming from the Ijebu axis would not have to even think about going to Lagos to fly.”

He added that the government will equally assist in the upgrading the Airforce School at Iyana-offa and help in connecting the school to the national grid.

The governor equally explained that the state has been fixing the road leading to the Air Force Headquarters in Akobo, Ibadan.

Earlier, Air Vice Marshal Makinde appreciated the governor for supporting the Air Force, saying: “It is an honour for me this morning to be here to visit the governor and it is good to share that wonderful surname [Makinde] with you as the Executive Governor of Oyo State.

“I bring you greetings from the Chief of the Air Staff, Air Marshal Isiaka Oladayo Amao, who asked me to expressly tell you that he is most grateful to you and the good people of Oyo State for the hospitality you have continued to give to members of the Nigerian Air Force.

“I want to thank you for the support you have been giving to military and other security agencies in the state, especially the Nigerian Air Force. This has been unprecedented.

“The Executive Governor has promised to ensure our Air Force Comprehensive School is connected to the national grid. When I visited the Unit this morning, the Commander assured me that whatever the governor says he will do, he will definitely do it. “So, I am thanking you in anticipation for that promise you have made to the Unit.”

Air Vice Marshal Makinde assured the governor that NAF will continue to be committed to ensuring the security of lives and property in the state.

“NAF is ready to assist you in any way and any area that you require assistance to be able to provide the much-needed security for the people of Oyo State and this concerns all areas you might think of,” he concluded.