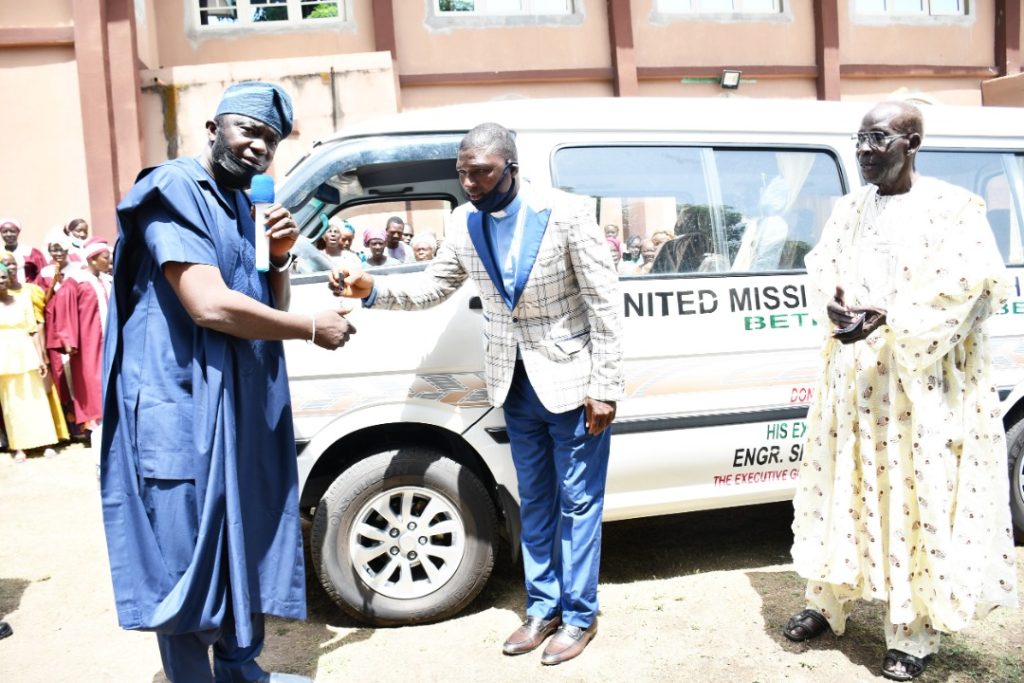 The Executive Chairman of the Mineral Development Agency, Mr. Abiodun Oni, has maintained that the Oyo State governor, ‘Seyi Makinde, has the interest of all residents of the state at heart and that he would continue to work for the development of the state.

Oni stated this on Sunday at the United Missionary Church of Africa, UMCA, Bethlehem, Igbeti, Oyo State, while presenting an 18-seater bus to the church on behalf of Governor Makinde.

He noted that the governor will continue to be fair to all religions and that he would always do what is required to develop the state.
The bus presentation, Oni said, was in fulfillment of Governor Makinde’s promise on December 25, 2020, when he attended a thanksgiving service at the church in commemoration of Pa. Jacob Adetoro’s 80th birthday.

Oni said: “Let me state clearly that Governor Makinde is one of us in Igbeti. He is part and parcel of the story that came out sometimes in this town but, above all, he is a philanthropist and he has always been before he became the governor.

“He came to our church on December 25 last year during the birthday celebration of our father, Chief Jacob Gbadebo Adetoro and one of his promises was that he would give us a bus for the evangelism of the Lord’s gospel.

“You know that he is a talk-and-do governor; whatever he says he will do, he will always do. So, what we are seeing today is the fulfilment of the promise he made to us and we are really thankful to God.

“We are also thankful to the governor for making this possible. We are all overjoyed that this came to pass and we can rest assured that the bus will be used for the purpose it is meant for.

“I want to also say that Governor Makinde is the governor of everybody in Oyo State. He has the interest of everyone at heart; Muslims, Christians and traditionalists. He will always do whatever that is required of him to do.”

In his response, the minister-in-charge of the church, Rev. E.A. Onipede expressed joy, appreciating the governor for what he described as a rare gift to the church.

“I am overwhelmed right now. The joy is too much for receiving a gift like this at this moment. Even, the whole congregation is happy with this development and we appreciate the governor for this. It is really a rare gift.

“Let me add that the people of the state really need to continue to pray for the government of Governor Makinde to be successful. A leader can hardly succeed without the support and prayer,” Onipede said.