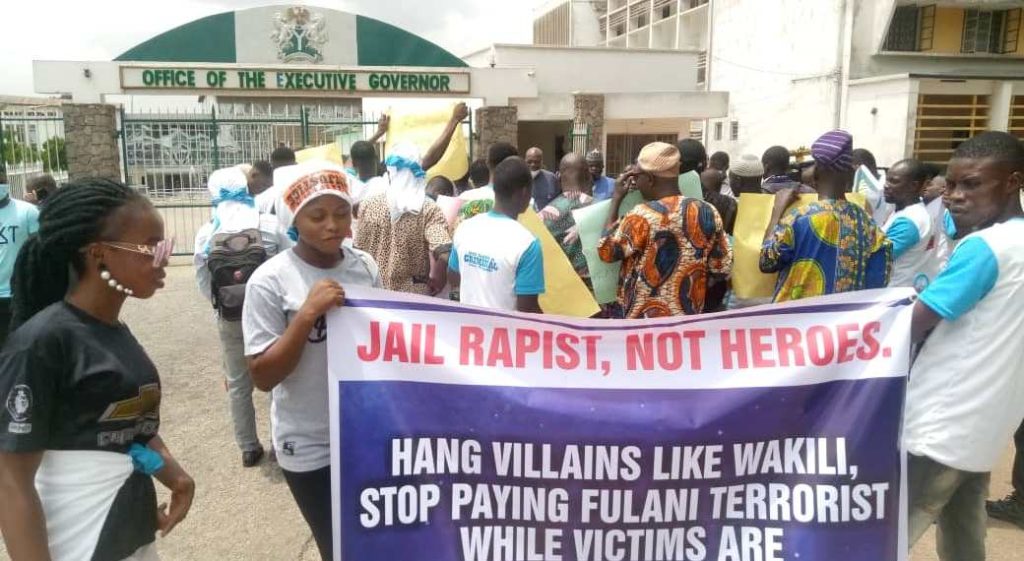 Youths from Ibarapa area of Oyo State, on Monday, stormed the State Secretariat at Agodi, Ibadan, to register their displeasure against the incessant killings of their people and destruction of their farms by criminal herdsmen.

The youths are also demanding the unconditional release of three members of the Oodua Peoples Congress who arrested alleged Fulani ‘warlord,’ Iskilu Wakili arraigned by the Police.

It was gathered that the protesters, armed with placards with various inscriptions denouncing killings, kidnappings, rape and massive destruction of farms and other atrocities, stormed the Governor’s Office around 10:40am to register their displeasure about security issue in the area.

One of the organisers of the protest, Oladiran Oladokun, who is also the Convener of Igangan Development Advocates, told newsmen on the sidelines of the protest that the arraignment and remand of the three OPC members was a signal to many Nigerians that security agencies cannot be trusted.

He said Wakili terrorised the people for so long, adding that despite their refusal to arrest him, the OPC members and others risked their lives to arrest the septuagenarian herder but they were detained by the police on the same day.

“We are here to protest the arrest and remand of the three OPC members in prison. These men are heroes, they risked their lives to arrest Wakili who has terrorised the people of Kajola, Ayete and other villages.

“They went to Wakili’s place and arrested him but the police turned against them and detained them. This is a bad signal to Nigerians on security issues,” Oladokun said.

Recall that there is growing insecurity in Ibarapa area where suspected Fulani herdsmen have killed, raped and kidnapped farmers and other residents.