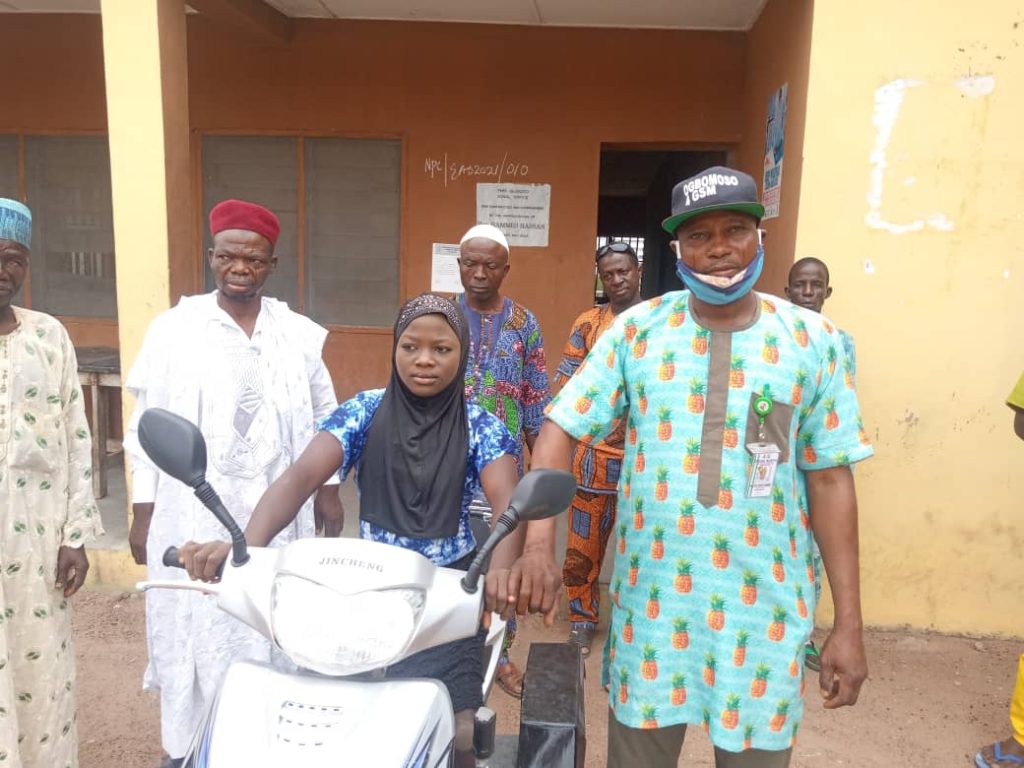 The Caretaker Chairman of Oriire Local Council Development Area, Olokoto, Alh. Wahab Kareem, has described the passions of His Excellency, Engr. Seyi Makinde (FNSE), the Executive Governor of Oyo State, towards helping physically challenged people as second to none, and as such inspired by the passion.

In a press release statement, made available to heritageecho.com, through the Council Information Officer, he said, the council boss, Alhaji Wahab Kareem, affirmed this while presenting a brand new customized JINCHENG Motorcycle to Asiata Musa, a primary 5 physically challenged pupils from Elekuru Village of the LCDA, yesterday, 18th March 2021, at the LCDA secretariat Olokoto.

He describe the occasion as a fulfillment of his desire to follow the footsteps of Engr. Seyi Makinde, who not only gave him the platform to serve his people, but also inspired him a lot to help the less privileged.

According to Alh Wahab Kareem, “ the day I saw her on her mothers’ back going to school, I was greatly moved, and since that day I made up my mind to assist them, because I have been inspired by Governor Seyi Makindes’ passions to help the less privileged especially those who are physically challenged”.

The Council Boss said, he decided to go for the Motorcycle, specially Customized (Locally) for the physically challenged people instead of wheelchair due to the terrain of the road from Elekuru, which may be difficult to ply using the normal wheelchair by the girl. But with this motorcycle, she could go anywhere without the assistance of anyone and will not be having the difficulty of getting to school punctually.

Gracing the occasion are the parents of the girl, Alh Sheu Ajao and Memunat Musa as well as people from Elekuru village. They expressed their profound gratitude to the chairman in coming to the aid of the girl as well as his help in solving water problems through the sinking of borehole in the village.

It could be recalled that the Chairman recently empowered the youths and farmers in the LCDA through presentation of various empowerment items which include Brand New Boxer Bajaj Motorcycles, Sewing Machines, Grinding Machines, Sprayers and Herbicides.