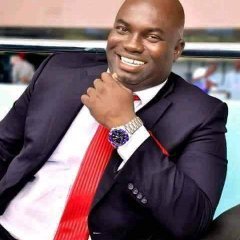 The opposition party in Ogun State, People’s Democratic Party (PDP), has suffered another huge loss, as one of its key prominent members, Engineer Adeola Sosanwo, defect to the ruling APC.

Sosanwo was the PDP’s senatorial candidate for Ogun East in the 2019 general elections. The former PDP chieftain has also given a crucial reason why he decided to pitch his tent with the ruling party.

According to The Nation, Sosanwo who was the PDP’s senatorial candidate for Ogun East in 2019, said he decided to join the ruling APC, so as to work with Governor Dapo Abiodun in moving Ogun state further on the path of progress.

Heritageecho.com, gathered that the former PDP chieftain has picked up his APC registration card at Ward 03, Sagamu, Ogun State.

His statement reads:
“I have always been an APC person but was hijacked by the PDP due to the fact that I wasn’t getting due recognition under the immediate past government of Governor Ibikunle Amosun then.

“I have however decided to be back to the APC to support our good brother, the governor of the State, Prince Dapo Abiodun in his determination to leave the state far better than he met it.” He said