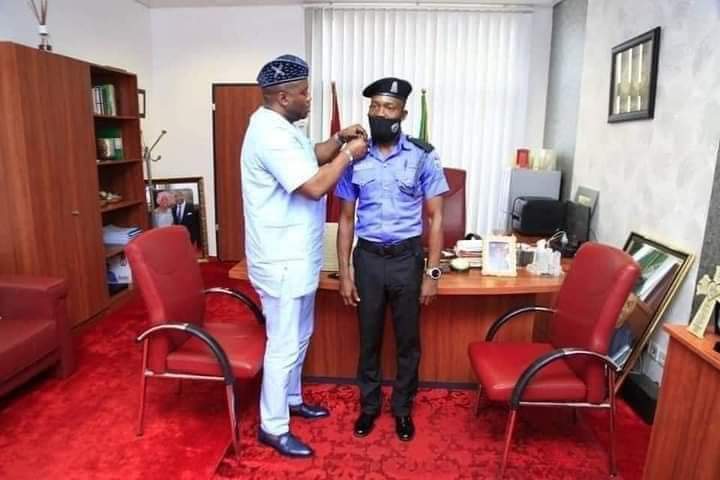 … Senator Albert Decorates him with New Rank, Donates Car to aid his duties.

History was made on February 16, 2021 when a police officer from Ini Local Government Area of Akwa Ibom State, Celestine Obot Williams, who was wrongfully dismissed from the Nigeria Police Force for a period of 21 years ago and later re-instated, was promoted to the rank of an Assistant Superintendent of Police (ASP). The promotion takes effect from June 11, 2020.

According to Glo TV, the story of his re-instatement/restoration began in 2016 when he submitted apetition to the senator representing Akwa Ibom North East Senatorial District, Senator Bassey Albert Akpan (OBA) requesting for his re-instatement for wrongful dismissal.

In the petition, Senator Albert Akpan requested the Senate to intervene in view ofthe fact that the police wireless message attached to his request revealed that the appellant, who at the time of his dismissal, was a constable, was not tried but dismissed for an undisclosed offense.

The Senate consequently recommended
his re-instatement and promotion to the rank at par with his mates. After dueinvestigations and deliberations by the Police Service Commission, Mr. Williamswas accordingly re-instated in May 2017 but not at his due rank.

Speaking on the re-instatement and subsequent promotion of Mr. Williams,
Senator Albert was full of praise for President Muhammadu Buhari for the remarkable working capacity of his government. He equally thanked theleadership of National Assembly for taking positive action on the petition from his constituent .

He also had words of appreciation for the Nigeria Police Service Commission who contributed to the resolution of the matter, the Inspector Generalof Police, the entire Nigeria Police Force and others who played their part by standing up for justice to the glory of God.

A highly elated ASP Williams was today, March 11,2021 decorated with his new rank by Senator Albert Bassey in his office. While decorating Mr. Williams,Senator Albert charged him to be patriotic, selfless and honest in carrying out hisduties and should see beyond his travail over the years but to look into the future with all amount of hope and trust in God that who had promised was able to make do that which he promised.

ASP Celestine Williams has been posted to Zone 6,Calabar, Cross River State and is to be paid all his arrears and entitlements forthe last 21 years while the Distinguished Senator has donated a vehicle to ASP to him to aid his movement in the discharge of his duties.