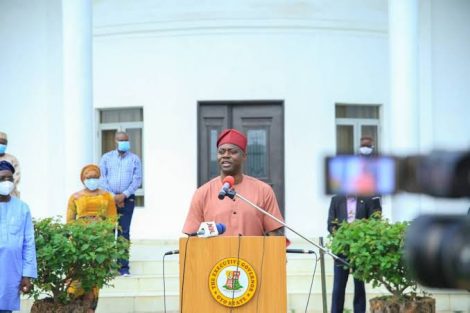 The government of Oyo State, on Thursday, confirmed the receipt of 127, 740 doses of AstraZeneca COVID-19 vaccines from the National Primary Healthcare Development Agency (NPHDA), Abuja.

A statement by the Chief Press Secretary to Governor Seyi Makinde of Oyo State, Mr. Taiwo Adisa, indicated that the vaccines were received in Ibadan by the Oyo State Primary Healthcare Board, in Ibadan, on Thursday.

According to the statement, the Executive Secretary of the Board, Dr. Muideen Olatunji, who confirmed the development said that 127,740 doses of the vaccines were received by the state government as part of the first phase of vaccine distribution.

Dr. Olatunji maintained that the state government has commenced the training of health workers who would apply the vaccines, adding that the medical workers will also be trained at the local government levels.

Olatunji said that “the state has received 127, 740 COVID-19 vaccines dispatched from Abuja by the NPHDA on behalf of the Federal Government,” stating that the vaccines were received in good condition and that they have also been kept in appropriate cold rooms.

According to him, the state government has commenced the training of health professionals who will administer the vaccines to residents of Oyo State.

Dr. Olatunji said: “I can confirm to you that the Oyo State government has received a total of 127, 740 AstraZeneca vaccines from the National Primary Healthcare Development Agency. The vaccines are in good order and we have warehoused them in appropriate cold rooms.

“We have very strong cold rooms and we cannot even use up to one-third of the capacity in the state.

“We have already commenced the training of health workers, who will administer the vaccines. Next week, we will equally conduct the training at the local government levels.

“We will push the vaccines to the 33 local governments where they will be kept under appropriate conditions.”