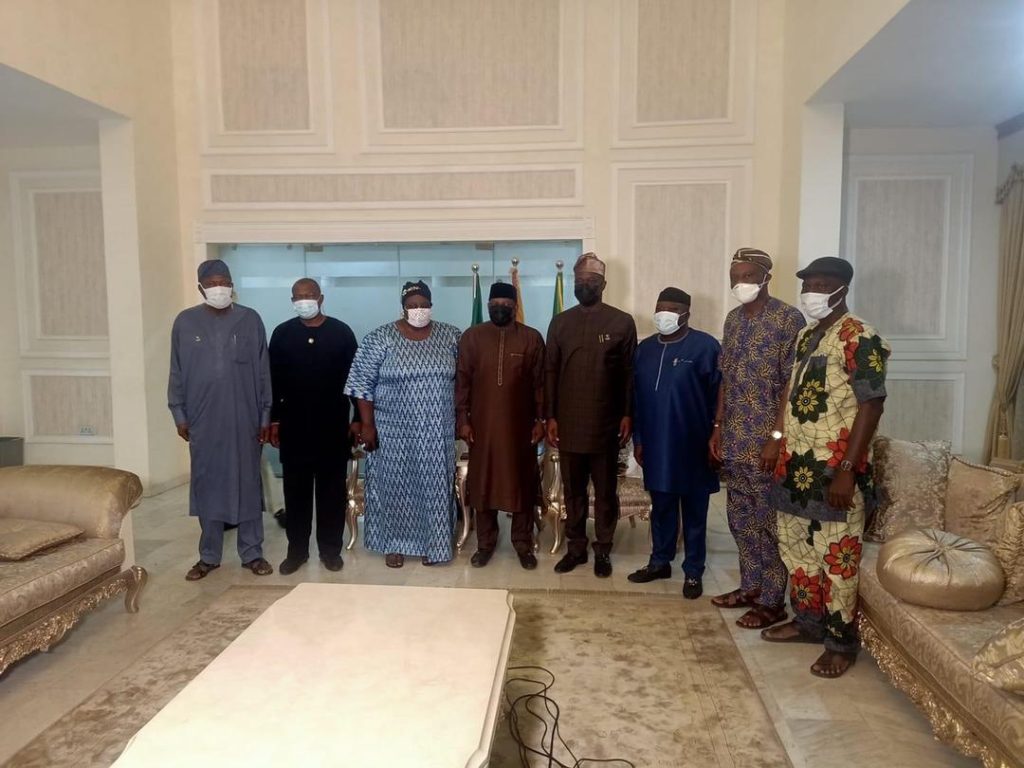 The electoral committee of the Peoples Democratic Party (PDP), which monitored the local government primaries in Oyo State, has declared that the process was free, fair and credible.

Chairman of the panel, Senator Abdul Ningi, who spoke at the Government House, Agodi, Ibadan, the state capital, when his committee presented its report to Governor ‘Seyi Makinde, said that the committee was impressed by the conduct of the primaries.
Senator Ningi, who led members of the panel to the Government House, said that the electioneering procedure was satisfactory to the committee.

A statement by Mr. Taiwo Adisa, Chief Press Secretary to Governor Makinde, quoted the governor as saying in his response that the good job done by the Ningi-led committee has set the tone for the deepening of democracy in Oyo State.
The governor equally urged party leaders to unite all members of the party, especially those not satisfied with the outcome of the primary exercise, stating that there are many positions left to be filled and that everyone would be carried along.

Speaking while presenting the report of the committee, Ningi said: “So far, so good, the electioneering process is satisfactory to us as a committee. This is among the very best local government primaries that I have attended. I am satisfied, especially with the openness of the state government and the party.

“We discovered there was a free and fair election because we went round the metropolis. We went to the outskirts of the city to witness the local council election and we are satisfied with what we have seen.”

He added that Governor Makinde allowed them to do their work without any hindrance, while also thanking the national headquarters of the PDP for sending them to conduct the primaries in the state.
He also urged party members to eschew violence and desperation that can affect the oneness of the party.

“Your emergence as the governor and a leader in the PDP, is a testimony to the services you have rendered to this state. Your Excellency, we are happy that you have accorded us reasonable hospitality.
“We thank you and the party for giving us access to all the discussions. We thank the national headquarters for sending us to come to Oyo to conduct the primaries. Our party members should eschew violence and desperation.”

He equally stated that PDP views Oyo State as very strategic in the South-West and that the party wanted to create opportunities for people to make sure there is a sense of belonging, hence the local government election.

He maintained that his committee ensured that all those that need to know are aware that it was around for the assignment.
“We partook in the consultation between the committee set up by the state and the party and we are satisfied.

“Where we discovered gaps, we called the attention of the leadership of the party to it and it did the needful. Truth is, we cannot satisfy everybody. There will always be losers and winners.” Ningi said.
Similarly, the secretary of the committee, Chief Afolabi Akanni, said the party wanted harmony, oneness and the spirit of give and take, while also commending the developmental strides of the governor in the areas of urbanization, rural development and road construction as trail-blazing.
He equally appealled to members, stakeholders, and leaders to come together and see the party as their own.

While recieving the report, Governor Makinde thanked the committee members for their commitment and dedication to duty.

He said: “I just want to say thank you on behalf of our party and also the government and good people of Oyo State. We want to say thank you for being with us for one week. I am sure you planned for two or three days but you saw what was on ground and decided to do a thorough job, not minding other commitments that you may have had. So, we say thank you to your team for your commitment and dedication to duty.”

The governor appealed to aggrieved members of the party to eschew violence and come together to strengthen the party.

He explained that what the electoral committee has done was to set the foundation to deepen democracy in the state and set PDP on the path of consolidation particularly in Oyo State and South-West in general.

“Incidentally, the governor recounted, “exactly this date, two years ago, 9th of March 2019, was the exact date we had the election that brought PDP back into Oyo State. And prior to March 2019, there was no PDP government in the Southwestern part of Nigeria.

“But on this date, history was made. And on this date, today, you presented the report of the electoral committee to us and what you have done is to, again, set the foundation to deepen democracy in our state and set PDP on the path of consolidation, in Oyo State in particular and South West in general.”

Governor Makinde then appealed to PDP members to accept the outcome of the elections with open minds, while also charging the leaders to find means of reconciling the aggrieved members, saying there are various positions to be occupied.
The governor said: “For some of our people that are aggrieved because of the outcome of this process, yes, it is only God that can give power to anybody. If it is not your turn today, it may be your turn tomorrow. But one thing we must not do is to pollute the well in which we may want to drink water from in the future.

“So, please it is time for us to begin the process of reconciliation. We must bring everyone together and ensure there are no victors nor losers.”
He asked party leaders to appeal to those that are dissatisfied because, according to him, only God gives power.

“To those our leaders that have not been satisfied, I want to say it is the same family. We all worked to bring this party together to bring about this government. We may have disagreements on certain issues but we should find those things that unite us. You may be dissatisfied with certain things but we can, at least, discuss.”

He explained that the previous administration in the state did not conduct local government elections for seven years, adding, however, that the present administration has started the process of conducting election in less than two years.
He stated : “To the entire state, we are saying to you that PDP is back for good. Whereas, the previous administration could not conduct LG election in this state for more than seven years. But we have been here for less than two years and have set the ball rolling.

“So, we are here to consolidate on the achievements we have recorded so far and we solicit for your support as we move towards the conduct of state-wide LG election on the 15th of May 2021. So, I thank the National Chairman for giving us support and for sending this team. We could not have asked for a better team.”