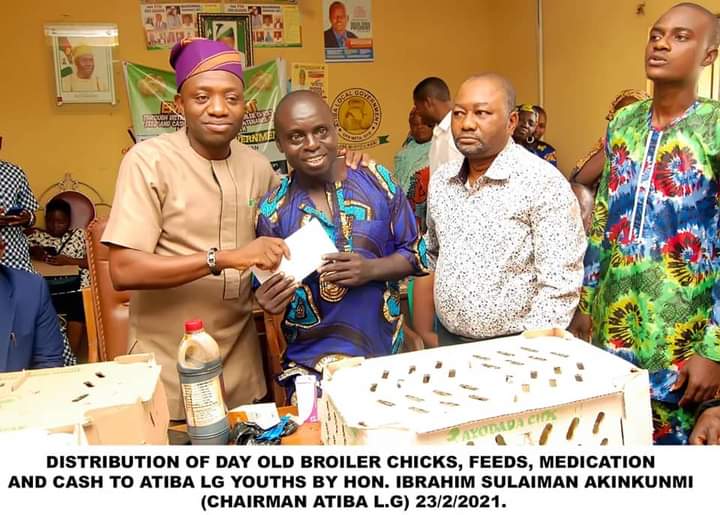 The Caretaker Chairman of Atiba Local Government, Honourable Ibrahim Sulaiman Akinkunmi has distributed day old broiler chicks to Youths in the Council area. In what was termed agribusiness program.

In a statement through the Special Adviser on Media and Publicity to the Chairman, Babatunde Ganiyy, said the beneficiaries of the agribusiness empowerment, were also given feeds, medication and cash for taking care of their poultry. Besides, over One hundred and fifty peoples were given cash gifts.

While presenting the chicks, cash, feeds and other materials, Akinkunmi disclosed that this administration, under the able leadership of People’s Governor, His Excellency, Engineer Seyi Makinde, is striving hard to ensure better engagement and increased quality of life for our Youths in Oyo State, an important reason for embarking on Agribusiness and several other programs that target youth development.

He said agriculture is one of the main programs of this government, as such, he has been doing everything possible to make life bearable for our farmers in Atiba Local Government with his little capacity.

The Council Boss, itemized the following programs he did, in the last one year, which included;

—Distribution of hybrid maize seeds and chemicals to our farmers.

—Ploughing of an acre of farmland per farmer for over three hundred farmers.

—Grading of roads that link our villages.

“This is an opportunity for our youths, government can not do all, we can only try and show them direction. We urge them to use the opportunity to secure their financial freedom. It may look small but with blessings of God, it can become big. You don’t grow big to start small, you start small to grow big. We want to see the start of this business, we would not want to see its end. We look forward to seeing them financially free in the nearest future.” he said.

He also thanked leaders and every individual party member for their support.

In attendance were the;
Honouravle Supervisors, Heads of Local Government Administration (HLGA), Directors, Party Leaders, Party Members and others.