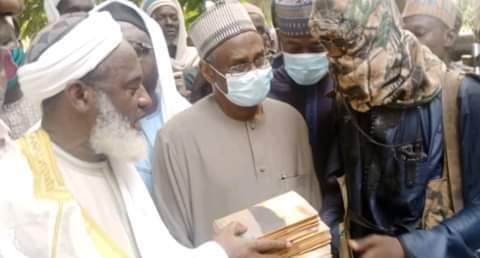 Ahmad Gumi, a prominent Islamic cleric, has described bandits as militants who are fighting “ethnic war”.

Speaking during a Channels TV programme on Monday, Gumi said bandits are not interested in killing people and that the “few” they have killed are “accidental” cases.

Gumi, who is known to have access to the bandits, also said they only kill people when they are avenging the death of one of them.

A number of states across the north-west and north-central have been experiencing increasing attacks by suspected bandits. When they are not abducting travellers, the bandits are reportedly ransacking villages.

According to Gumi, the bandits are mostly interested in ransoms from kidnapping and also open to negotiation.

“I choose to call them militants because they are fighting an ethnic war,” he said.

“They are kidnapping to get money. Look at the case where they released a bus full of people, they were asking N500 million but now, they freed them with mere negotiations for free. Nothing was paid.

“Since there is a peace process, they are ready to lay down their arms, stop kidnapping and all the things they are doing.

“And you call them killer herdsmen, how many people do they kill?

“When they kill, it is mostly accidental, maybe somebody they took who is sick. But tell me who they have killed? How many? Few.”

Asked about instances where the bandits have razed down villages during attacks, he said such cases are motivated by revenge.

“That killing is not because of criminality but for ethnic revenge. And they don’t attack a village except that village did something to one of them,” he added.

The cleric also warned that the bandits might be influenced by Boko Haram insurgents operating in the north-east if “if the pressure is too much”.

“I am afraid they can be influenced by Boko Haram. And we have seen the signs that Boko Haram is going to infiltrate them but so far, they are not Boko Haram,” he said