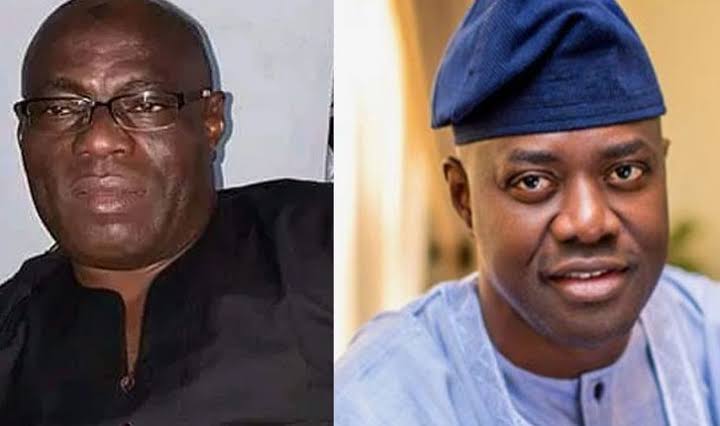 Certainly, a new political dynasty may have emerged in Ibadan and Oyo state politics, unknown to many neophytes.

The Olopoeyan political dynasty is expanding daily, across Ibadanland, Oyo state and Southwest, courtesy of governor Makinde inability to effectively manage conflicting interests both in Oyo state and the southwest.

Godfatherism can’t be erased entirely in politics, contrary to Makinde’s claim that he has no Godfather. Of course, he can’t be crucified for holding a thought. And even though he was only able to benefit from the efforts of Senator Ladoja, Senator Olufemi Lanleyin. Barr. Sarafadeen Alli and others who are regarded as Oyo political heavyweights at the wee hour of his governorship election, he shouldn’t have forgotten the clean and rough jobs the likes of Rt. Hon. Mulikat-Akande Adeola, Alhaji Bisi Olopoeyan, Engr. Femi Babalola, Oloye Jumoke Akinjide and others did for him before the party’s state Congress, at the party primary, and the governorship election proper.
If the subject of discussion is politics and focus is Ibadan, Oyo state, the name of Alhaji Bisi Olopoeyan will surely feature prominently. Although he has his base in Ibadan North East but his political antecedent with Baba Ariyibi Adedibu has earned him the nickname “Great Leader”. He is now becoming politically relevant beyond is geographical base and, indeed, Oyo state.

Part of what he is said to have inherited from his political father, mentor, the Late Lamidi Ariyibi Adedibu was the ideal of bravery and fearless politics, as well as the ability to voice at any opportunity.

Olopoeyan is known as straightforwardness man with ability to say things the way they are. His decision to take side with other PDP southwest zonal leaders against his state Governor’s decision is a typical example of his bravery, as it will be hard for newly emerging political leader to stand up against the decision of his state siting governor. Olopoeyan has since gone publicly against governor Makinde, supporting and canvassing for the re-election of Chief Eddy Olafeso from Ondo state for PDP zonal chairman ahead of the forthcoming congress under the nose of Seyi Makinde, his state’s Governor.

Olopoeyan was seen as a key figure, out of many, who worked tirelessly and selflessly for the victory of Engr. Seyi Makinde, the People’s Democratic Party’s candidate in 2019 governorship election. In that election, he certified his political leadership in Ibadan and Oyo state.

In one of his eulogies for Oolopoeyan when the road was smooth, Governor Makinde once said he (Olopoeyan) was unquestionably a great leader who finally created the lonely road to his political success.

But immediately after he was sworn in as executive governor of Oyo state, Makinde deserted those who really stood by him throughout the long journey to power, slammed the door on their faces, blocked all the channels of communication and only reached them at his own convenience.

Many politically conscious folks were disturbed by the unwillingness of Governor Seyi Makinde to operate within the bounds of the commitments to which he had entered before being elected as governor. More importantly, it is normal for the governor to defend and uphold the structure that got him the highest political position in the state.

What are the commitments ? Olopoeyan in one of his interview said, he is not interested in how Seyi Makinde is running his adminstration, nor is he asking him to open the vaults of Oyo State for him but to fulfill an obligation expected from a leader of a ruling party in power to chieftains, leaders and members of his own party.
It was leant that those commitments Olopoeyan is clamouring for were not for him alone, but to the party PDP and the massive body of supporters, who during the day and night worked to get him ( Seyi Makinde ) elected.

Olopoeyan said Makinde has dis-empowered leaders and supporters who worked for the success of the party in the 2019 elections, therefore weakening the party structure daily, with possible setback for the party in 2023.
In one of his views about politics and reward, he said he is not part of people who propagate that, the reward of politics is in heaven. Last year when he went to a radio station in Ibadan, speaking about the negligence of ruling party and its members by Governor Makinde, Olopoeyan said those who stood with Makinde through thick and thin of 2019 election did not do it for heavenly reward. He opined that every individuals, group and organization who contributed to the success of Seyi Makinde were also expecting to gain one or two good things in return if he won, and they all expected to eat where they worked but Makinde is a kind of politician that doesn’t believe in rewarding loyalty.

Olopoeyan can be described as an Apostle of Democracy dividend, he is a political leaders who believed it is a must to feed the workers during harvest, and he is a leaders who clamours for even distribution of political gains.

There was a time he was asked how his relationship with governor Makinde started, he said, he had known Makinde for more than a decade ago and he sees him as a political young chap.

” I took governor Makinde to his first PDP local government meeting, I took him to his first ever state congress, he was denied entry but, I did smuggle him into the pavilion. I did many things for him so as to have a soft landing in PDP, but he later left our party during the preparation for 2015 election. After he contested and lost 2015 governorship election in SDP, he left the country to stay abroad, and it was during one of my visits to UK that I called him, and he promised to hook me up in London, which he did. We met around May 2015.

“We met and I asked him to come back to our party, gave him my words that with the help of other leaders he will be given support to actualize his long time dream of becoming Oyo state governor, which we did”, Olopoeyan said.

The great leader has on many occasions narrated how he stepped on toes of political bigwigs in the state, just to make sure Seyi Makinde got the PDP governorship ticket in 2018. He said, he ( Olopoeyan ) Mulikat and others masterminded the parallel state congress which gave birth to Makinde’s unmatched chances for the party governorship ticket.
“You can ask him ( Seyi ) how we organized a late parallel congress that restored his chances of becoming Oyo state governor in 2017. He had already lost out to Baba Ladoja camp in PDP then, if not for Alhaja Mulikat, Alhaji Gbolarunmi and some of us that backed him up. Even though we organised the parallel congress because of him, he still didn’t understand the power play, and his mind was at Senator Ladoja Congress at Watershed.

“Later, with the efforts of Eddy Olafeso, Ayo Fayose and people in Abuja our own congress was amended with that of Baba Ladoja camp. We pushed him upfront at zonal and national, to the extent that he was accepted as a man to do with. He had is way both with the parallel congress and state governorship candidate through this Eddy Olafeso that he is fighting now.”

Olopoeyan has always been a promise keeper, many have been accusing him of not supporting his own state candidate for Southwest PDP chairmanship position. But according to him, he said some of the legacies inherited from late Adedibu is promise keeping. He made it known that, it could have been a positive development if Oyo got the chairmanship position but, they, leaders from Oyo had conceded and agreed that Chief Eddy Olafeso should be returned as the zonal chair, so he doesn’t want to be part of betrayers.
Eddy Olafeso in a visit to Olopoeyan house in Ibadan, confessed that Bisi Olopoeyan is indeed a political great leader. Why addressing men and women of different groups of PDP at Olopoeyan house, He said ” Though, I am a bit older than Olopoeyan in age, but in Politics he is my Leader “.

Bisi Olopoeyan, “ Great Leader “ has he is fondly called, even by Governor Makinde his not a special man in his house, particularly among grassroots politicians and his political associates. A first time caller at Olopoeyan residence at Bashorun will find it difficult to understand the kind of relationship between him and his associates. His typical day starts with meeting with politicians, and if there are no visitors, he will be within his loyalists who had considered his house as their second homes discussing and cracking jokes. You would hardly hear Great Leader saying he needs a rest except he has to go out or observe compulsory Muslim prayers.

Olopoeyan is an unpredictable man, a coin with two faces. The only people who can give an accurate description of Olopoeyan are the one who have engaged him in one way or the other. It is true, he can’t be divorced from daily political struggle.

But he once said politics is a dirty game, so, there will be necessary to fight for ones right. If struggling, fighting to get ones right in politics will be the last resort to get it, Olopoeyan is someone who always fight to get what is meant for him but will never go beyond caution .
“As a politician, you need to fight for what is due for you when some power drunk, overzealous elements want to use power conferred on them to collect what is meant for you inappropriately. I fight for major causes and reasonable issues if need arises but at a limit. I am respecter of law, I do go to an extent of appeal and re-appeal to get my target in politics also,” Olopoeyan said.