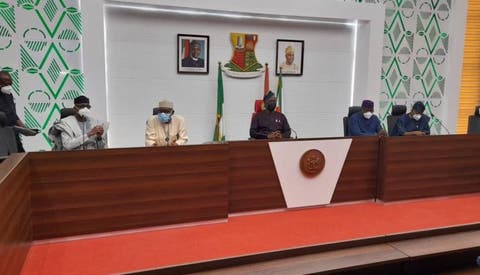 The Governors of the Southwest and some selected first class traditional rulers in the  zone  are currently holding a security meeting at Oyo State Executive Chamber, Agodi,  Secretariat, Ibadan.

The meeting which commenced at about 3pm has in attendance the Chairman of the Nigeria Governors’ Forum, NGF, Dr Kayode Fayemi, Governors Rotimi Akeredolu of Ondo, Dapo Abiodun of Ogun, Gboyega Oyetola of Osun and the host governor – Mr Seyi Makinde of Oyo State.

Among the traditional rulers that are participating in the meeting are;  the Ooni of Ife – Oba Enitan Ogunwusi; Alaafin of Oyo – Oba Lamidi Adeyemi; Akarigbo of Remo – Oba Babatunde Ajayi; Olugbo of Ugbo kingdom – Fedrick Akinrutan; Olubadan of Ibadan – Oba Saliu Adetunji and Olugbon of Orilegbon – Oba Francis Alao.

The Deputy Inspector General of Police, in charge of the South-West – Mr David Folawuyo, the Oyo State Commissioner of Police – Ngozi Onadeko and other heads of security agencies in Oyo State are also in attendance.

The Chief of Staff to President Muhammadu Buhari – Professor Ibrahim Gambari; Inspector General of Police – Mohammed Adamu and the Director General of the Department of State Security, DSS – Yusuf Bishi could not make the journey to attend the meeting due to bad weather.

It is expected that the chairman of the Southwest governors’ forum, Governor Akeredolu will brief journalists at the end of the meeting.