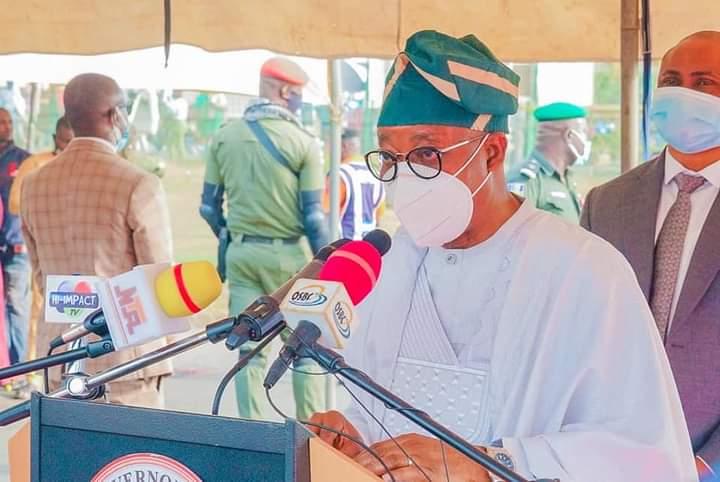 The Executive Governor of Osun State, Isiaka Gboyega Oyetola has flagged off the construction of the Olaiya Flyover in Osogbo, yesterday.

In a statement through his Chief Press Secretary, Mr. Ismail Omipidan and made available to heritageecho.com, said, The project was necessitated by the need to enhance quality of lives of our people and improve infrastructure in our city that is becoming more populated and boisterous on account of increasing business activities.

Specifically, Governor Oyetola said, the project will address growing traffic around major routes in the city and particularly, the Olaiya axis, leading to waste of man hours by residents in our State. It will also prevent frequent cases of accidents that have claimed lives. We cannot afford to waste more lives.

The proposed flyover is a 4-span of 15m each, with two Underpass bays for U-turning to Fakunle/Justrite and MDS/Post Office. It is a 295.95m length of Bridge Approach Ramp, 196m long Fakunle Ramp, 99.95m long MDS Ramp, with slope of Ramp being 3 per cent.

Addressing the people at the ceremony, Governor Oyetola discussed that the project would cost the State a total sum of Three Billion, One Hundred and Eighty Million, Three Hundred and Seventy-nine Thousand, Eight Hundred and Twenty-Nine Naira, Seventy-Six Kobo (#3,108, 379, 829.76).

“It is noteworthy that the Flyover will be financed through our Alternative Project Funding Approach (APFA). By this, it entails that the contractor will fund the project, while the state repays the contractor over a period of time so as to enable Government free up resources for its other important obligations”.

“Consequently, this project will not in any way stop us from delivering on other dividends of good governance, including citizen’s welfare, regular payment of workers’ salaries and pensions, completion of ongoing projects and initiation of more projects across the State”.

“Realising that the closure of the Olaiya road will bring some temporary difficulties, we’ve made enough provision for alternative routes to serve vehicular needs. I, therefore, appeal to owners of businesses around the project site to bear with us, as we’ll try as much as possible to minimise the inconvenience”.

Earlier, the Speaker of the House of Assembly, Honourable Timothy Owoeye, lauded Governor Oyetola for given Osun, particularly, Osogbo for face-lift socio-economic and infrastructural development.

In his remarks, Commissioner for Works and Transport, Engr. Remi Omowaye, said the idea to construct the flyover was conceptualised as part of the efforts to reduce traffic, lessen accident rate and advance the infrastructure development in the State.