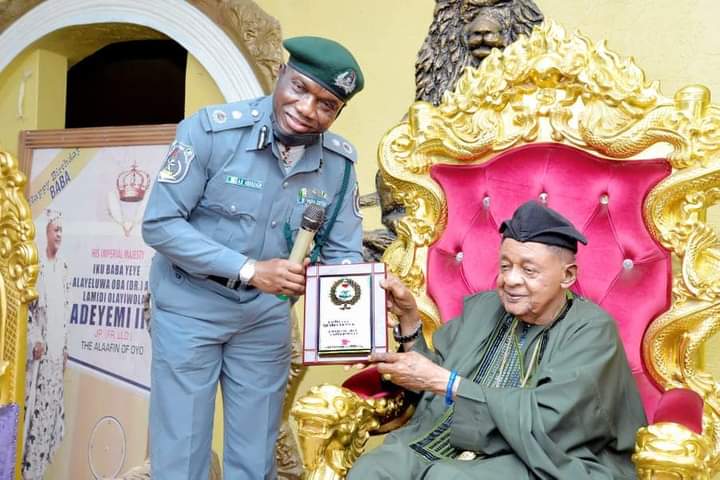 The Custom Area Comptroller in charge of Oyo/Osun Area Command, Comptroller Adamu Abdulkadir and His Team pay a courtesy visit to the Alaafin of Oyo, today.

His Imperial Majesty,Oba (Dr.) Lamidi Olayiwola Adeyemi III, JP, CFR, Ll.D, SAP, the Alaafin of Oyo and his Oyo-mesi in Council warmly received the Custom Comptroller and his delegates at the monarch palace, Aafin Oyo.

Comptroller Adamu appreciate warm reception from the Yoruba monarch, while affirmed by that, he has further enhanced its anti-smuggling strategies by taking the battle to the doorsteps of the smugglers, rather than waiting for them to come out, in an operation code-named ‘Operation Fish Out’ while invoking sections 147 and 151 of Customs and Excise Management Act to search premises for un-custom good.

He then presents award of honour to the Imperial Majesty, the Alaafin of Oyo land.