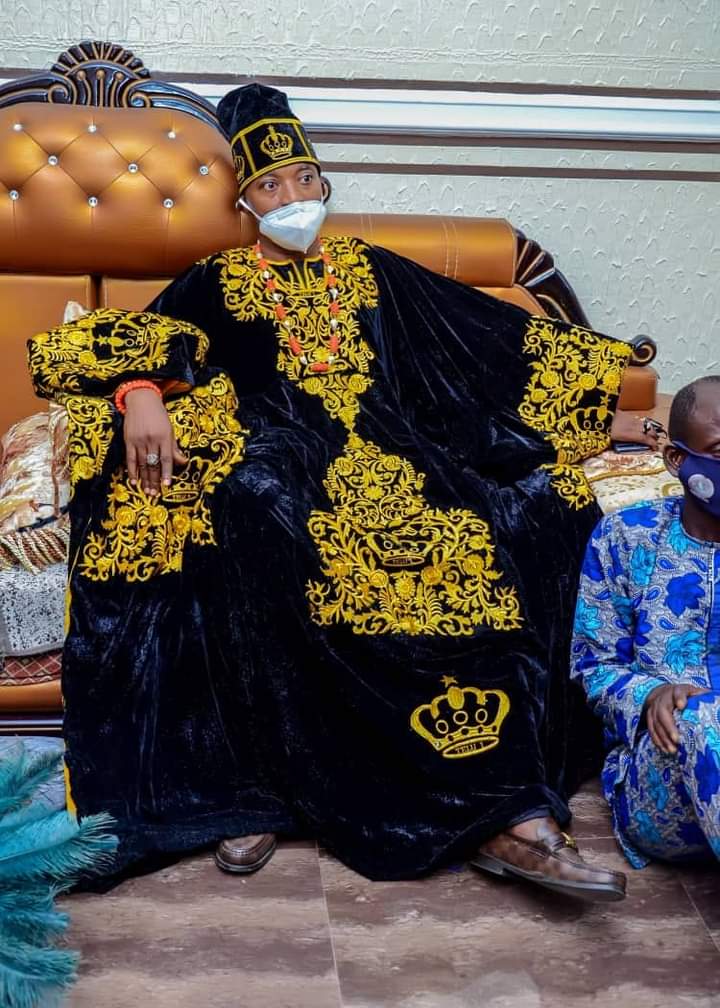 The Oluwo of Iwo land, Oba (DR)
AbdulRosheed Adewale Akanbi, Alase Lori Orisha, TELU I, has wrote the presidency on predicament associated with insecurity, mourned the victims of insecurity and condoled with their family.

In a warning letter directed at President Muhammadu Buhari and made available to Heritageecho.com, he expressed worry about the country’s insecurity.

“I begin to read about Nigeria and Nigerians at my early days in primary school. Nigeria is a complex nation with numerous ethnic attachments. I grew to note that Nigeria was born with many challenges, competing with human to discredit official leaders. All The root of insecurity transcending to the Southwestern states associated with kidnappings, rapings Leadership positions are not without challenge as managing human and resources is the most difficult task. A nation built on ethnic rivalry as Nigeria requires painstaking management. Some families and peers failure have invited countless hardship on the leaders, presumably government and traditional Rulers while failure of past occupants of various leadership positions have zero the trust in leadership.”

“I must condole with Nigerians and families of those who have loss their relatives to banditries and all forms of insecurities. I pray for the fortitude to bear the irreplaceable loss. As a natural paramount ruler and one of the fathers to the nation, I’m bereaved. No father is happy when his children are killed. To you all, may God forgive your shortcomings.”

It is not without anyone’s knowledge that today’s problems were products of yesterday’s failures. The root of insecurity transcending to the Southwestern states associated with kidnappings, rapings and subsequent ransom collections are products of past failures of some stakeholders in the government and families.

The root of today’s predicament associated with insecurity and credited to the Fulani/Bororo were invited by past corrupt and visionless leaders who could not foretold it that, leaving people to stay in the forest without amenities, luxury of life and modern technology will unavoidably promote insecurity at a slight exposure to those accessories.

‘Today, some Fulanis/Bororos in the forest have been exposed to luxurious benefits such as cars, magnificent houses and amenities. We’ve them as house maids, house assistants, gatemen while we kept our cows with some as business. At a taste of such luxuries and in comparison with life in the forest- of no wife, no electricity, no road, no spices, no car, no modern structure, they took to arms, kidnapping, raping, torturing and demanding ransom to enjoy life accessories. The end justifies the means. Some Fulanis are neglected. The government know they are Nigerians but refuse to address their solitary lifestyle. Many of them refused to be educated. We’ve such in major ethnic divisions in Nigeria. These people in the core grassroots felt little or no taste of government. And they feel the pleasure of having houses,cars from all of us. They device means, illegal or not, they care less.”

“At an attempt to feel belong, they resorted to means of raising their standard, not minding the consequence. In the unrepentant move, many became victims, innocently maimed and killed. The Fulanis are everywhere. They have domesticated their lifestyles. They know the nooks and crannies of everywhere. Many have their parents and grandparents born here. They know no home except place of birth. They eat the food of place of birth, speak the language and cohabit mostly in the forest. Many are now building block houses instead of their traditional huts. Unfortunately, many of them are not attracted to formal education. That complicates the problem. To make the matter worst, the bandits who find joy in disturbing human peace infiltrated. They operate together and develop technicalities in kidnapping and ransom collections.”

PIECES OF ADVICE TO THE GOVERNMENT

As a long term solution, the affairs of those people at the core grassroots without social amenities and basic infrastructures should be properly monitored and catered for urgently. Formal education or vocational skills should be made compulsory for herders. Parents of children between 5-25years seen with cows should be prosecuted. I’ve done this in my domain. The herders should be made to be educated embrace cities lifestyle and not bush. They should be empowered with education. The life is richer in the cities than the bush. Doing such will shape their aspiration to legal means of making huge income.

Also, data management of everyone on Nigeria soil is a necessity to efficiently monitor and detect infiltration. I commend the federal government led by President Muhammed Buhari for enforcing NIN. The value is priceless. The enlightened will appreciate this better, soon. Creating data bank for Nigerians will enable security agents and agencies to easily monitor criminals and crimes.

Moreso, traditional rulers across Nigeria should see themselves as father to the nation irrespective of ethnic background. There was a time I visited the Fulanis and I called myself their Emir. I understand the phenomenon and move along. Leadership requires given your people the desired attention and cater for them. Irrespective of your ethnicity, you are my subjects on my land. Our monarchs, being the closest to every tribe in their domain, should embrace them such that at a fragile point as this, they can be easily controlled.

For those who know me and have read about me, I’ve experienced war. At war, there is no children, no parents, no family and no friends. At war, you will see human eating human flesh. Is that what we are drumming? No. I can’t be part.

I appeal to Nigerians to embrace peace. What war can do, peace can do better.

Once again, I mourn the victims of insecurity, condole with their family and pray for a peaceful nation.

And to all of us in Leadership position, this is the most critical time to domesticate special intervention programmes to the grassroot dwellers. It is not have to be Fulanis alone. Banditry knows no tribe. Nigeria will rise. Let’s promote her greatness.