MAKINDE: EDUCATIONAL ADVANCEMENT IN ISEYIN, A BEAM OF LIGHT TO THE TRADITIONAL WEAVING CITY. 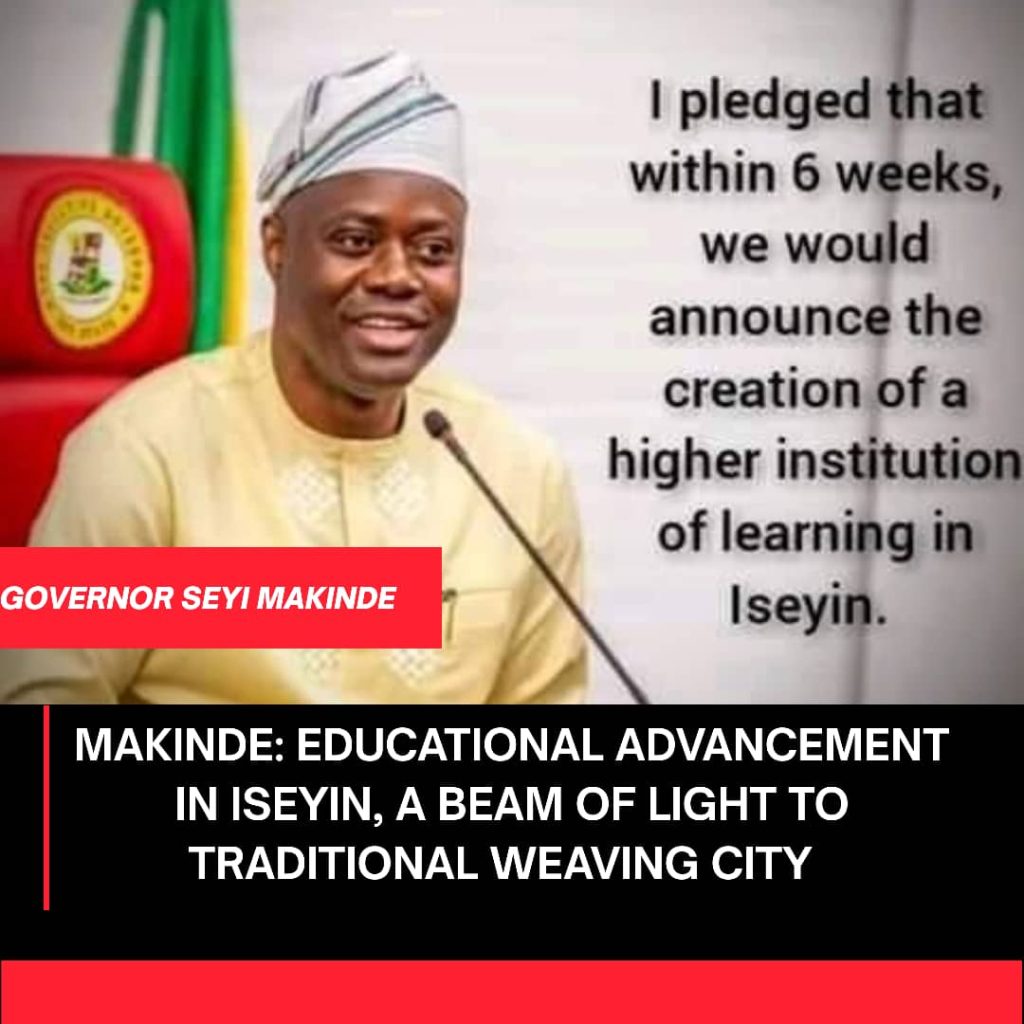 Iseyin is a city known for best production of traditional traditional fabric worn on special occasions. The home of Ebedi moko is centrally located and accessible via road networks from Ibadan, Oyo, Abeokuta, and Ogbomoso. Iseyin is bless with expanses of land which can be used for industrial, agricultural and institutional purposes in and around the city.

The city of Iseyin has a private Polytechnic named SAF Polytechnic, Iseyin, a Government Technical College and the Oyo state NYSC (National Youth Service Corps) permanent orientation camp. Iseyin also has an ultra modern private Digital Library named Raji Oke-Esa Memorial Library, these are the tertiary/learning facilities in Iseyin. Oyo State is 45 years old as it was created on 3 February 1976 and no government since the creation of the state has ever placed the heart of gold in the city towards educational advancement in Iseyin land.

The right of access to higher education is mentioned in a number of international human rights instruments. The UN International Covenant on Economic, Social and Cultural Rights of 1966 declares, in Article 13, that “higher education shall be made equally accessible to all, on the basis of capacity, by every appropriate means, and in particular by the progressive introduction of sound education. Bearing in mind that the moment Governor Seyi Makinde was sworn into office, his pronouncement on abolishment of school fees in both public primary and secondary schools as well as benchmark/optimal level of funding for education is symbolic.

Effectively, Governor Seyi Makinde believes that the goal of education is the advancement of knowledge and the dissemination of truth, he acknowledged the fact that knowledge is power,information is liberating and education is the premise of progress in every society and in every family.

Siting an institution of higher learning own by government in Iseyin will turn mirrors into windows, bring higher social trust, expose learners to a diverse set of people and ideas which expand their mind, and economic growth of the community. Truly when an entire society is educated, productivity increases, average income increases, and unemployment decreases. This leads to the economic growth and stability of that society as a whole. It starts with education and the Governor of Oyo State has set his standard on education across the State.

Higher education is the hotbeds of innovation and entrepreneurship, academic research and technologies as the learners will be exposed and this will help them to drive an array of vital industries, the skills the learners will acquire will also make them to compete increasingly in global workplaces.

Iseyin is part of the Oke-Ogun towns referred to as the “food basket’’ of Nigeria. Positioning an institution of higher learning in Iseyin will also enhance the development of agricultural activities in the zone because of sustainable annual rainfall in the area, learners will be able to carry out research and expose to the major agricultural activities such as farming, hunting fishing, and food processing, among others as Iseyin people are known for virtually production of farm produces such as yam, maize, cassava, plantain among many others.

The roadmap of Governor Seyi Makinde for accelerated development in Oyo State on Education has shown that education breeds confidence, confidence breeds hope and the hope breeds peace. The ball has been set on motion and the oscilalatory movement of the ball is hitting the fulcrum that has unlock the golden opportunity that any leader can give to society which is sound education for the development of future.

Exclusively, with the new higher institution of learning in Iseyin, Oyo indigenes will have more access to quality and sound education, as it will help learners to grow personally, professionally, and socially. It will also help them become better versions of themselves as it will broadens their perspectives by learning about different societies and cultures.

Governor Seyi Makinde educational focus show a true leadership quality in him, as he has proved to the world that if a leader want to plan for a year, such leader should sow rice; if a leader is planning for a decade, such leader should plant trees; but if a leader with impeccable character is planning for a lifetime, he will educate his people. Governor Seyi Makinde knows the value of education and he place value on it as an investment in knowledge will pay the best interest in the future of the state.

Iseyin oro, oro ọmọ ebedi mọkọ,the qualifications and connections to get the foot into the door and take the seat at the table starts with sound education with the siting of higher education of learning in Iseyin community will propagate the land of Ebedi and greater development and economic expansion will envelope the city.